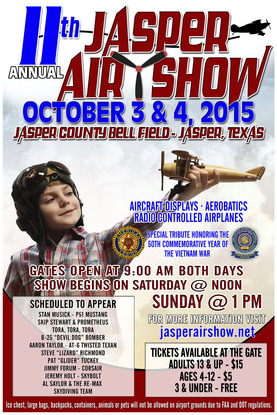 Coming back to the show this year is the World War II Bomber “Devil Dog,” a B-25 from Georgetown, Texas. Internationally known aerobatics performer Skip Stewart will be flying his spectacular routine in the “Prometheus”.
World War II War Birds will fly the sky with “Reno” National Championship air racer, Stewart Dawson flying the Hawker Sea Fury during the show. Plus, Doctor Stan Musick, a crowd favorite will perform aerobatics in a Corsair from the Dixie Wing Commemorative Air Force, and Jimmy Fordham will fly aerobatic in a P-51 Mustang, from the Southern Heritage Air Foundation, in Tallulah, Louisiana. Other planes and pilots will include: Infamous, Randy Henderson and the Texas T-Cart, Jeremy Holt- Sky bolt, Steve “Lizard” Richmond and Pat “Glider” Tuckey – flying RV’s in a formation routine, and a Zero, and Kate “TORA” planes from the Commemorative Air Force.

The B-25, P-51, Corsair, Sea Fury, and “TORA” Zero planes will perform a re-enactment of a World War II bombing run.

A once in a life time thrill is to ride in the B-25 Devil Dog and the crew will be offering plane rides at a cost of $395.00 per person. Call KJAS 409-384-2626 in Jasper, Texas or Debbie Foster 409-489-8447 to make your reservation or for more information.
The local chapter of the American Legion, Commemorative partner will pay special tribute honoring the 50th commemorative year of the Vietnam War thirty minutes prior the show both days.

The Re-Max sky –diving team, led by Al Saylor, will open up the show with their multi-jumper parachutes, and Ross Boyette will fly his remote controlled airplane for the crowd before the show.

There will be lots of food vendors with delicious food items, so come hungry. Mooney Fun Jumps will also be on location for the children, and Dream Big Entertainment, an authentic and fully restored A-7D Corsair II attack Fighter, will be there for a photo memory opportunity.

Gates open at 9:00 a.m. for static display on both days. On display will be a Super Cub, Helldiver, and more!

Due to FAA and DOT Regulations: Ice Chests, Large Bags, Back packs, Containers, Animals or Pets will not be allowed on Airport Grounds.